Seasons is a beautiful restaurant. The striking yellow interior is warm and welcoming. We were greeted warmly as well. This is a white tablecloth restaurant. Even the napkins were cloth. After we were seated we received some delicious crusty, warm bread with an herbal, balsamic dipping sauce. What a delightful way to start a meal.

We had just visited the DaVinci exhibit at the New Mexico Natural History & Science Museum . I will describe this exhibit in the explorations section. But now back to the food.

Seasons is a farm to table restaurant with fresh ingredients. It’s menu has a variety of salads which you can add a protein for an upcharge. The falafel tortilla wrap and a spinach and spring pea ravioli were the only other vegetarian items. I didn’t want ravioli because it was warm in Albuquerque that day but I wanted a little more food than a salad. I thought a wrap would do the trick. As you can see the presentation of the falafel tortilla wrap was delightful. The carrot and black quinoa salad was warm. I thought that was odd for such a warm day. We are talking 90 degrees warm outside. The quinoa was tasty. The wrap had shredded lettuce, tomato, cucumber, some tzatziki sauce with falafel and a pickle. My better half had the seared rare ahi tuna tacos. The tacos, which didn’t look rare to me, came with a warm corn flour tortillas, grilled pineapple pico de gallo, and a lemon aioli sauce. There was a small salad with cucumbers. Our friend had the rotisserie-roasted pork and smoked ham press with house made potato chips.  The pork and ham were on a toasted baguette with sliced pickles, Swiss cheese, with white wine Dijon mustard. 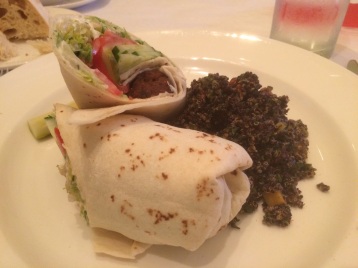 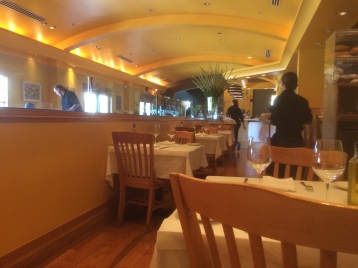 The interior of Seasons

The Interior of Seasons 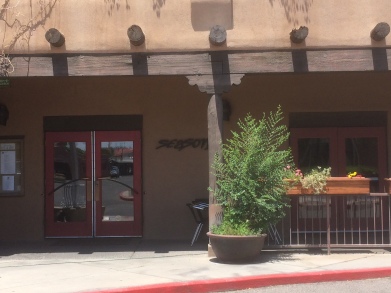 The front of Seasons Rotisserie & Grill