Restaurant Week in Santa Fe is a good way to revisit places you haven’t been to in awhile. It has been a few years since our last visit to Restaurant Martin. Wow! Have we been missing out.

To start, we received some interesting bread for the table with herbed butter. The waiter was very knowledgeable about the wine list. We were trying to figure out which wine would go better with the meal, a wine from Italy or a wine from Spain. I am a beer fan so I deferred this important decision to my better half. Our waiter suggested the lower price wine from Spain. It was a perfect pairing with our meal. But who recommends the cheaper wine, only a very good waiter. Impressive!

We had the baked cauliflower and pear bisque. This was very intriguing and inventive. It also had Washington state crispy oysters(not for me) with dill and I believe golden raisins. It was very rich and filling. I am not used to such a soup. But there was more food to come.

For my entree, I had the wild rice crepe. I absolutely love wild rice. It is one of my favorite kinds of rice. The crepe was a beautiful shade of green that was very conducive to eating. It was such a nice bright color. Think fresh. The wild rice was pared with spinach. One of sides was a stack of three Garnet Yams in a curry butter. They just seemed to melt in my mouth. Yum! But the next side was a small bowl filled with Brussels Sprouts. The Brussels Sprouts had an rosemary-orange glaze. They were incredible. I had to force myself to stop eating them. I think I would have been happy to just have a large bowl of  Brussels Sprouts. They are one of my favorite vegetables even before they became trendy.

The other entree that my spouse had was the Maine Lobster Agnolotti which was truly amazing. This dish also had the curried Garnet Yam with lemon, apples, tomato caraway jam along with turnips and a brown butter lobster fondue. What a fabulous dish!

For dessert, I had the sorbet selection. Yes, I continued to eat even though I was on the verge of exploding. I was really glad that the sorbet was nice and light. I especially liked the blueberry sorbet. I did like the Apple flavor but sorry I don’t remember the third sorbet.

From what I have been told the chef’s trifle duo was the dessert to have. I knew this was something spectacular because you got a spoon and a wooden scraper with the name Restaurant Martin on it. It was heaven! What a wonderful end to a lovely meal.

The Restaurant Week special price was 45 dollars per person with wine and tip extra. We are planning to return in the spring or summer because of the food and the outdoor seating. 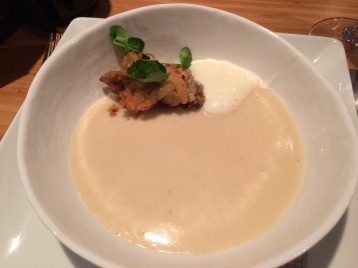 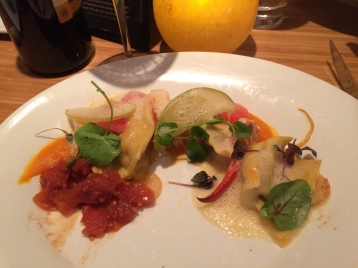 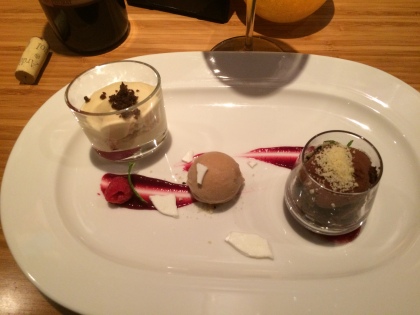 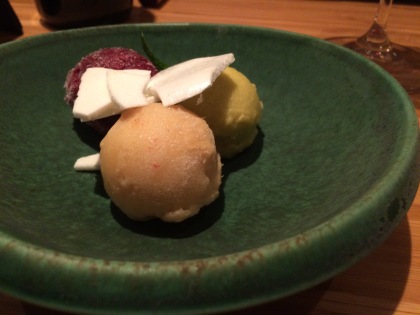