I finally had my Vegan Holiday Cooking Course with Amanda Hatherly from Santa Fe Community College. Yea! I have been lucky enough to have taken several courses from Amanda like Plant Based Nutrition: What’s it all About? Amanda’s courses are some of the best courses I have ever taken. She cooks and lectures while I get to eat all the good things that she cooks. It is simply amazing! I am still on my journey moving from pescatarian to vegetarian. Now because of Amanda ‘s cooking class I have some incredible recipes that just happen to be vegan.
Amanda started with appetizers and went to dessert. Her friends helped with this particular class. We started with a walnut pate, a pecan cranberry cheese Yule log(with ingredients such as coconut meat, raw cashew butter).
One of my favorite recipes was the Vegan Cauliflower Chorizo. Wow! We tried this on our meat eating friends and they thought it was delicious. Because it was. The secret ingredient in this particular chorizo was cauliflower rice. I first had this 2 years ago in a Nutrition class. Never did I ever think that I would be buying this at Costco. In fact I used to laugh at this product until I started to taste it. It tasted wonderful! All the flavors and none of that heavy feeling in your stomach after you eat this. Man, it had some kick to it as well. It was hot! But very, very good.
We also had some chanterelle mushroom butter, and vegan gruyere. Another favorite was the holiday festive salad. This had some tiny Brussels sprouts, butternut squash, quinoa, arugula, avocado, dried cranberries, raw pecans, 3 Tbsp of veggie broth, a little fresh orange juice, fresh lemon juice, and 3 Tbsp of balsamic vinegar.
There was also a leek mushroom gravy which was better than regular gravy. A green bean casserole was made with the leek mushroom gravy, with onion rings, and cranberry relish.
For the main course there was a millet loaf that was good but it took a great deal of time. Also there was a pineapple ham made with a celebration roast. You can get a celebration roast at either Whole Foods or Sprouts.
For dessert there was a pumpkin cheesecake, pecan bars, and a Puerto Rican Coquito. The coquito was made with coconut milk, coconut cream, lemon zest, cinnamon, some nutmeg and some vanilla extract. You can add rum to it but seeing that we were at school we didn’t have rum.

It was a great feast! I felt full but I didn’t feel uncomfortable. All the food was delicious! Thanks to Amanda I can add several recipes to my food repertoire. 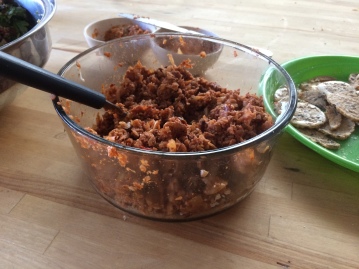 A little taste of vegan goodness 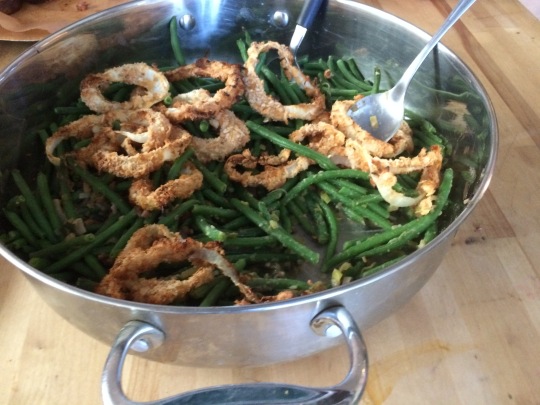