You have to go to this place! The food was absolutely incredible! Somehow we managed to incorporate Taco Tuesday and Happy Hour which was an amazing bargain. Poki Poblano Fusion Lounge is a brand new restaurant. We have previously dined at this location’s last 4 iterations. We are hoping that this restaurant stays. 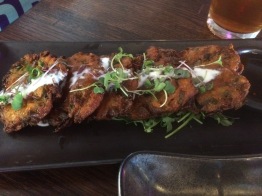 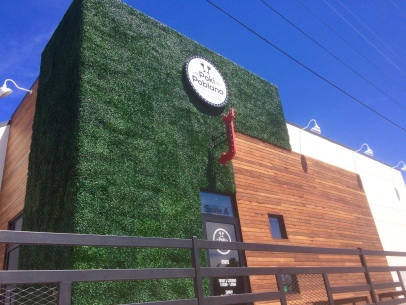 Currently, Albuquerque is seeing an explosion of poke restaurants. Don’t get me wrong, I love poke. But this restaurant has more choices than just poke. We are talking fine vegetarian and vegan Asian cuisine.

The big selling point that got us in the door was the kimchi pancakes starter. The big surprise was that these pancakes were vegan. The house made kimchi pancakes were part kimchi and sweet potato fritters with scallions and diced jalapeños. Wow! It tasted as good as it looked. The pancakes were accompanied with plum pear sauce, vegan sour cream, sambal soy sauce. This starter or shareables, as they are listed on the menu, was addictive. The flavors just meld together. The sauces add to the flavor of the pancakes. The kimchi pancakes were so delicious that we ordered another to go. I couldn’t get enough of this tasty creation. This is the first time I have ever thought to place another order to take home. It was that good!

I had the plantain empanadas which were vegan and gluten free. It was displayed beautifully on the black plate just as the kimchi pancakes were. Plantains are a personal favorite even though they are fried. So the dough was made of plantains while the empanadas were stuffed with house made vegan feta cheese, spinach, and pine nuts. On the side there were Mexican pickled peppers, mushrooms, and tomato. Wow! I was impressed. I am just starting to really appreciate good vegan food. I saved a piece for the next day. If possible, it was even better than the first day. I could really taste and enjoy feta and spinach with the pine nuts. It is a little test I like to give my food. If the food is good or better than the first day, I’m going back to that restaurant. During Happy Hour, 3  pm to 6pm, there are drink specials but right now all the sharables are also 20% off.

Since it was Taco Tuesday, we had to have tacos. The tacos here are street tacos. The tacos were 2.50 apiece instead of 4 dollars.  We both had the vegan BBQ tacos which were marinated soy curls, avocado, Korean BBQ sauce, slaw, and vegan cream. Wow! These tacos tasted as good as they looked. This vegan food rocks! Oh, and this tasty delight is also gluten free.

We also tried the vegan jackfruit taco adovada with grilled pineapple, red onion, cilantro, and lime. It was incredible! What a small bit of heaven!

I tried the beer battered avocado with cabbage slaw, chipotle sauce, and  pickled watermelon radish. This was all new to me. It was delicious.

We had iced tea with this exceptional meal. Poki Poblano Fusion Lounge has an interesting cocktail menu. Next time I will investigate it.

I can’t say enough good things about this restaurant. Our server, Jaay, was knowledgeable and very enthusiastic. He is a vegan and is very excited to be working with such incredible food.